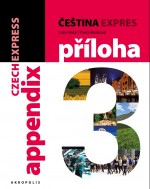 This publication, which covers the first half of the A2 level, follows on from the coursebooks Czech Express 1 and Czech Express 2. In seven practically focused lessons, Czech learners can learn to orient themselves and react in further communicative situations (e.g. on the topics of Countries, Nationality, Languages, What you like and don't like to eat, People around us, Family relationships, Where I live, Appearance, How to be polite and many others). The coursebook concentrates on mastering all the language skills. Czech grammar is simplified as far as possible and the student discovers it for themselves through text and overview tables. The coursebook is designed for teaching both in groups and on individual courses.

Czech Express 3 is composed of two volumes. The first volume contains the coursebook and workbook and is entirely in Czech. The texts and exercises in this book are complemented by a number of colour photographs and original illustrations including the popular cartoons. The second book is the Supplement with vocabulary, grammatical tables and explanations which help the learner get to know Czech through their first language (published in English, German and Russian versions and we are preparing versions in other languages). The set also includes a key to exercises and an alphabetical dictionary for the whole coursebook.

The audio recordings in MP3 format and other materials including the Teacher´s Manual can be downloaded for free here.

We use cookies to improve your visit to this website, to analyse its performance and to collect data about its use. We may use third party tools and services to do this and the data collected may be transferred to partners in the EU, the US or other countries. By clicking "Accept all cookies" you consent to this processing. You can find detailed information below or modify your preferences.

Show details
Our webpage stores data on your device (cookies and browser's storages) to identify your session and achieve basic platform functionality, browsing experience and security.
We may store data on your device (cookies and browser's storages) to deliver non-essential functions that improve your browsing experience, store some of your preferences without having an user account or without being logged-in, use third party scripts and/or sources, widgets etc.
Use of analytic tools enables us to better understand needs of our visitors and how they use our site. We may use first or third party tools to track or record your browsing of our website, to analyze tools or components you have interacted with or used, record conversion events and similar.
We may use cookies and third party tools to enhance products' and/or services' offer of ourselves or those of our partners, its relevancy to you, based on products or pages you have visited on this site or on other websites.
Close
×